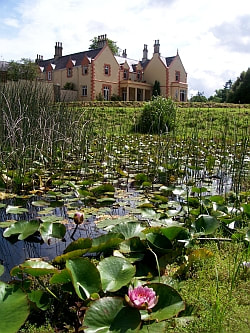 Day three of our journey took us to the East as we participated in Hare Krishna and Buddhist ceremonies.

We left the Europa Hotel at 9:15 a.m. after the much-anticipated arrival of Zahra. (Our group is now complete!) As we drove past lush green hillsides, windmills and sheep, we saw first-hand why this is called the Emerald Isle.
​After a two-hour bus ride, we took a ferry to the Hare Krishna temple on the island of Inis Rath in Upper Lough Erne, Co Cavan, near the border of Northern Ireland and the Republic. In the mid-‘80s this aristocratic house was turned into a temple for the worshippers of Krishna.

Every Sunday the Temple conducts a traditional Arti ceremony, followed by a class studying sacred texts and a vegetarian feast. The service is open to all and brings together regular devotees and curious tourists. Today Austin and Lisa, who live in the area, came to the temple to understand the religion and eat from the bountiful vegetarian delicacies. “I had an uncle who was Hare Krishna, but he drove a fancy car and wore tailor-made suits,” Lisa said. “This seems very different.”

Indeed, the Hare Krishna on Inis Rath do not have that lifestyle. They live simply with limited electricity and outdoor toilets**. Ten members stay in the temple and others live nearby. We all took part in the Arti ceremony. During the ceremony Manu, the temple president, led us in the Hare Krishna mantra, something we were all familiar with after meeting Hare Krishna monks in New York. As soon as he began to sing and play on the harmonium (a cross between a small piano and an accordion), out popped 16 digital cameras, mini-disc recorders and flip cameras. Our dynamic journalism team flitted around the room making sure every angle was photographed and recorded.
But slowly, we put down the cameras and got into the melody. The rhythmic chanting – accompanied by the harmonium, hand symbols and a mrdanga, a two-headed drum – engulfed the room.

During the chanting, a worshipper offered up a lamp, water, flower and incense before a large gold altar adorned in flowers. Children ran around passing similar items for the worshippers to smell (flower), sprinkle (water) and pass their hands over (fire).
“They are the happiest of religions,” said Miriam Donath. “We should spend a week learning how to be peaceful like them.”

After the ceremony, Manu led us in the reading of a passage from the Bhagavad Gita (Song of God) and gave a short sermon. Every week a different community member gives the talk. In the sermon Manu preached austerity and the need in all religions for increased spirituality.
“If you pray to God, ‘I want a color TV, I want a house by the sea,’” said Manu, “you are put in a position where God becomes an order supplier.”

His message struck a note with a few of our group. “I was awestruck by his humility and it is beautiful that he wants to shun all material things,” said Maria Tirmizi.
After the sermon we took part in a feast featuring Indian vegetarian foods. We sat in a U shape on the floor while we were served heaps of rice, dal, vegetables and sweet desserts.

“When a lot of the devotees come at first they gain a lot of weight,” said Fiona, a worshipper who lives 15 minutes away from the Island in a farmhouse with no electricity. “The food is too rich to eat all the time.”

image: Manu Das lectures on Vedic Philosophy
Fiona comes to the feast every week with her four children. She said she had been searching for a religion her whole life. Brought up by strict Protestant parents, she had lived on a Kibbutz for a year, visited Buddhist temples and looked into Islam, before joining Hare Krishna 12 years ago when pregnant with her first child.
[1]   [2]    Next >>