Yoga is an ancient system of connecting with Reality, as described in the Vedas. The Veda are a vast body of knowledge which are said to be like a "manual" to accompany the Universe. The Vedas  were written down around 3000BC in the Sanskrit language by sage Vyasadeva, who is described as being an empowered avatar of Vishnu. In general, yoga is a process of focusing the mind and senses for a higher goal.

​A yogi is someone who practises yoga. The word itself is often used for a wide spectrum of motivations: for example, a Bhakti Yogi (a process aimed towards pure spiritual love, Krishna-prema); or one could meet someone who might be described as a "yogi" who knows how to do some visually impressive tricks such that people pay him to see his magic; or someone else could be described as a yogi as she has a beautiful body
​and can hold a physical posture which looks spectacularly perfect. 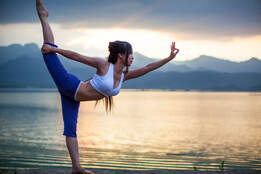 In essence, a yogi is trying to connect with higher consciousness and find love. Vaishnava authorities, sincere gurus and scholars would teach that a trickster who has learned some system how to manipulate matter in a way that people may see as being fascinating, and uses that to make an income, has taken a side-path. In the Srimad Bhagavatam (a Vedic text) it is described that Dhruva Maharaja was the young son of a King. He practised severe penance and yoga for 6 months, fasting and standing on one leg for weeks on end. In the end he discovered that his motivation had been all imbalanced. He had been doing the hatha yoga system as he wanted to get a personal - one could say 'selfish' - result. But in the end, by the grace of Vishnu, he found peace, love and harmony.

One might wonder what does the historical narration of Prince Dhruva have to do with ourselves in the modern world? Essentially, we're all trying to find peace, love and harmony. Dhruva had some stresses millennia ago. We have our own struggles and stresses now. So, when we approach yoga, ideally we should look into the inner meaning by approaching teachers, listening to lectures and reading translated ancient texts.

A primary book on philosophy is the Bhagavad Gita As It Is, which discusses karma yoga, hatha yoga, dhyana yoga (meditation) and bhakti yoga.