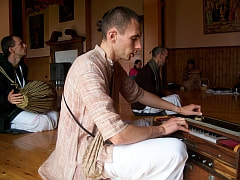 “The philosophy drew me in but the music kept me,” she said.

It is Fiona's job to wash the floors after we leave. She says it’s not publicized, but when she finishes sweeping the floor, a few members of the temple return and spend the next few hours singing in front of the altar.
image: Krishna Kirtan (chants) on Inis Rath

After our taste of Hare Krishna, the day was not done.
We headed into the Irish Republic and to Jampa Ling, a Tibetan Buddhist center founded in 1990 under the spiritual leadership of the Tibetan monk Panchen Otrul Rinpoche.
After settling into our rooms and exploring the breathtaking landscape we were treated to delicious vegetarian dinner, where Ani-la, a nun in the Buddhist center, greeted us.
The main practice the temple follows is the devotion to White Tara, a female Buddha known for compassion, long life, healing and serenity.

“Compassion is the wish for other people not to have suffering,” Ani-la explained. Based on this principle, the center is very involved in projects in Mongolia that help the locals build their economy and rediscover Buddhism. Rinpoche spends his summers working in Mongolia and Ani-la often accompanies him.

“It is important not to just meditate on compassion,” said Ani-la, “but to make it active in your life.” 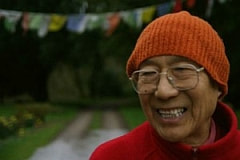 After dinner we participated in an hour-long puja, a Buddhist ceremony that involves meditation, chants and visualization exercises. Sitting on cushions on the floor, Ani-la led the session.

Here is an example of one visualization:
“Imagine that the whole world of space in front of yourself is full of clouds. They are clouds of Wisdom and Love. Arising in the clouds, there comes eight-petalled lotus, in the centre of which is a moon-disc. On top of the moon-disc sits wish fulfilling Tara.
image: Tibetan monk at Buddhist Centre in County Cavan
During the questions and answer period, Ani-la addressed the controversial issue of the use of the swastika symbol in some eastern religions.
“It’s one of the earliest symbols of strength, “ she said. “It has been in Buddhism for generations and generations before taken and used as it was.”


**Editor's note: Inis Rath Island has a standard electricity supply.  The author was talking with Fiona, who personally lives in an off-the-grid rural location, but that's another property. Also, there are outdoor toilets for day visitors, but ten additional indoor toilets for residents / guests.
If you're thinking of coming for a retreat and you read "there are no electricity and toilets", you may decide to go elsewhere!